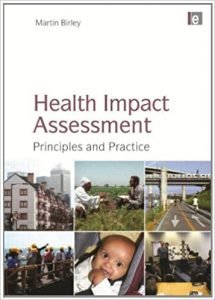 Health Impact Assessment (HIA) is primarily concerned with the future consequences of plans, proposals and policies on the health of communities. It is a rapidly growing complement to Environmental Impact Assessment, increasingly mandated by national and international requirements. Guidelines have been produced by many national and international organizations and it is being introduced in a number of undergraduate or postgraduate university curricula. However, there has been until now no broad-based, introductory text of international scope to the subject, suitable for both these courses and for professional training.

The purpose of this book is to fill this gap and to introduce the subject of Health Impact Assessment using plain language, in both general and specific contexts and with reference to both market and less developed economies. As a result, the reader should be able to describe what HIA can and cannot achieve, identify the components of a successful HIA and participate in an assessment as a member of a team. Examples are provided from a number of planning and development sectors, including extractive industry, water resource management, and housing. The reader, whether student or professional, need not be a health specialist, although prior knowledge of some public or environmental health would be an advantage.

Dr Martin Birley is an independent international consultant in Health Impact Assessment, former Senior Lecturer at the University of Liverpool, UK, and former Senior Health Advisor on HIA at Shell. He has been at the forefront of global health impact assessment for over 30 years. He was involved in the development of the discipline since its early days in tropical medicine, to its later emergence as an instrument both for healthy public policy in the UK and Europe, and for community safeguards by international development banks.

He has personal experience of many sectors including water resource development, agriculture, oil and gas, housing and planning. He has written guidelines for health agencies, development banks and multinational corporations. He continues to work all across the globe as well as in the UK. He runs training courses for institutions worldwide. He currently heads up a London based consultancy, www.BirleyHIA.co.uk .

Martin’s depth of experience places him in an ideal position to provide an introduction to the rapidly expanding field of health impact assessment, for the benefit of newcomers and experienced practitioners alike.

The book can be ordered from the following sources, as well as from any book seller. In many cases a 20% discount is available on the publisher’s listed price.

Aslo available as E-book from Kindle, Acrobat and perhaps other formats.

HIA: Principles and Practice – Preface
I have watched HIA grow from an off-the-wall, cranky kind of idea to a mainstream pursuit. I am reminded of Schopenhauer’s dictum that all truth passes through three stages: first it is ridiculed; then it is violently opposed; finally it is accepted as being self-evident. In the early days I was told that I was wasting my time, and later I was told it was an inappropriate academic pursuit. Now I am told it is self-evident.
The material for the book grew from teaching and training material that have been used and tested in many introductory lectures or courses on the subject. The audience for those courses have been drawn from many cultures and have included both postgraduate students and professionals. About half have had some form of health background such as medicine, nursing, occupational safety or community health. I have observed the bewilderment of experts without health backgrounds when presented with the question “what is health?”, as well as the bewilderment of those with health backgrounds when presented with the proposition that health is largely determined by decisions made outside the health sector. Many of the training courses have had an inter-sectoral focus. Experts from widely different disciplines do not always have skills in framing questions or explanations to colleagues in other disciples. I hope I have included enough explanation and examples to make my meaning clear to readers from many different disciplines.

HIA is now conducted in such widely different settings and contexts that they seem to be speaking a different language and have very different aims and objectives. Finding the common thread is getting harder. For example, there are civil servants in the UK who seek to maximise the health gain of local public sector policies. On the other hand, there are managers of transnational corporations who seek to safeguard the reputation of their company while implementing a project in a rural area of a least developed country. There are policy makers in the European Commission who seek to ensure that new social policy conforms to treaty agreements.

There are still vast and unexplored territories in the area of expertise covered by HIA. These await discovery by the next generation of practitioners. I try to map out some of the issues that have yet to be resolved and to put them in the context of examples based on my own, and others, experience.

Water-associated infectious diseases claim up to 3.2 million lives each year, approximately 6% of all deaths globally.

The extractive industry significantly transforms environments, communities and economies and may manifest in conflicts between a resource developer and local communities

Poor housing and indoor environments cause or contribute to many preventable diseases and injuries, such as respiratory, nervous system and cardiovascular diseases and cancer.

Growing rates of obesity worldwide are linked to a rise in chronic diseases such as cancer, cardiovascular disease and diabetes Healthy urban design is part of the solution and can depend on health impact assessment of plans and policies.